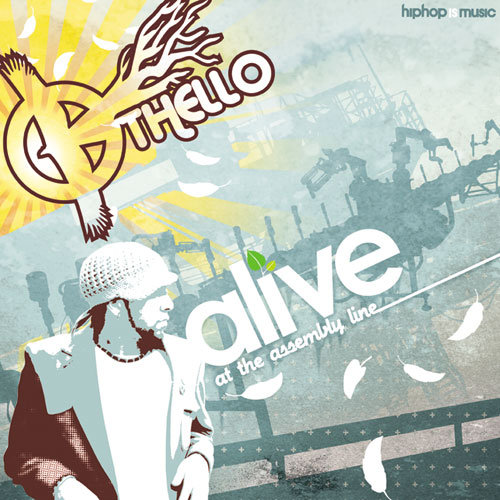 I’ve decided to start with this album because it’s great, but also because of the story behind it.  This is the first album that I found that was honoring of the Lord and that was great hip hop, period!  The Lord used this album to change my life.

But before I get fully going on the album, I want to explain our philosophy of album reviews on Simple Victory.  We aren’t reviewing albums on whether they are good or not.  If someone is creating music that honors the Lord, then it is not in our interest to criticize, but to uplift.  If you are honoring the Lord with your music, Praise the Lord.  This review, and the subsequent ones will be albums we already feel are good or great and believe you would enjoy too.  Think of them as closer to elaborate recommendations with a breakdown of why we think this album is something you should listen to.  So if you see an album on this site, we think you should hear it.

Ok, now that you already know I am a fan of Alive at the Assembly Line, I’m going to tell you WHY I think you should listen.

The title track is where the album first hooked me.  This is the track I would usually go straight to when starting the album.  As with all tracks a live band brings the production to life, but the piano really shines.  Propaganda has a great verse and brings his usual energy and thought provoking lyrics.  Othello has a fun verse that bounces along with the beat.  Vursatyl rounds it out with a great verse about balance and the work of the Lord to achieve it.  This is a fun track that the piano and trumpet really bring to life. “Work it out ya’ll”

This is the track that solidified my fandom of Othello and my love of this album.  When the trumpets come in at the beginning, I knew I was done.  The track is about breaking the cycle’s of self-inflicted negativity and letting God break you from them.  Surreal’s verse discusses how we can leave all our issues and concerns with Him, and he will break down the walls and cycles in our life.  Finally, the bridge just adds to the production’s jazz sensibilities and focuses you on the great production and musicality.

R.A.P.S. is probably the most straight forward hip hop track, production wise, on the album but is a GREAT showcase for Othello’s exceptional lyricism.  This track is one of my favorite concept tracks, period.  There is a long line of great MC’s who’ve tackled similar letter based verses and Othello’s is at the top.  For two verses, every bar has words starting with R.A.P.S., in that order.  These are not incoherent verses under that pretense, these verses actually have a real narrative flow; an amazing feat of lyricism.  If you need a track to understand just how great an MC Othello is, this is the track.

This is one of the chill tracks with one of the few r&b style hooks on the album.  Othello discusses trusting God as he walks this life and this journey in music.  We need God in our lives and when we allow His truth to lead us, even if we don’t have the whole picture, we can trust in His direction.  This is beautiful change of pace in the album.  With the smooth production, vocals, and a great message, no wonder this track is my wife’s favorite.

I believe this is the best track on the album.  The production, with its drums and bass followed closely by a beautiful sax, introduce the lush production and sets an amazing canvas for Othello.  The first verse discusses how we can drift from our focus on the Lord and the things that allow us to be successful.  His second verse speaks to how we think we are making the right decisions but we can’t see the long-term effects and how those decisions will end disastrously.  The last verse calls out that not only do those decisions end poorly, but coming back from bad decisions can be very difficult and costly.

The part of this track that seals it as the best on the album is the extended jazz outro.  This outro could be a track unto itself.  I’d pay good money just to hear this band.  The combo of great production, thought-provoking lyrics, great flow, and an amazing jazz outro easily make this the standout track.

This is a great track by Othello, Ohmega Watts, and Braille, aka Lightheaded.  I bring this track up specifically because this is the track I heard on a mainstream hip hop Pandora station.  When I heard it, they didn’t preach but what they said spoke of the Lord and pricked my heart.  With that seed planted I looked them up and found out they were great MCs and producers that honored Jesus.  My life has never been the same and I thank artist like Othello and Lightheaded for making great music that honors the Lord.

If you’ve made it this far, you can clearly see that I am a huge fan of this album.  I’d been waiting for an album like this, and for it to come from an artist honoring the Lord was… a Godsend.

I think if you love good music you will love this album.  I hope you will check it out, and not only stream it but support Othello, and any artist we recommend, by purchasing his album from Itunes, Google Play, or directly at Othello’s (Ozay Moore) bandcamp page.

Othello’s Alive at the Assembly Line is a great album that we can use to stay close the Lord.  Let’s support artists that follow Him, and helps us run this race to win.