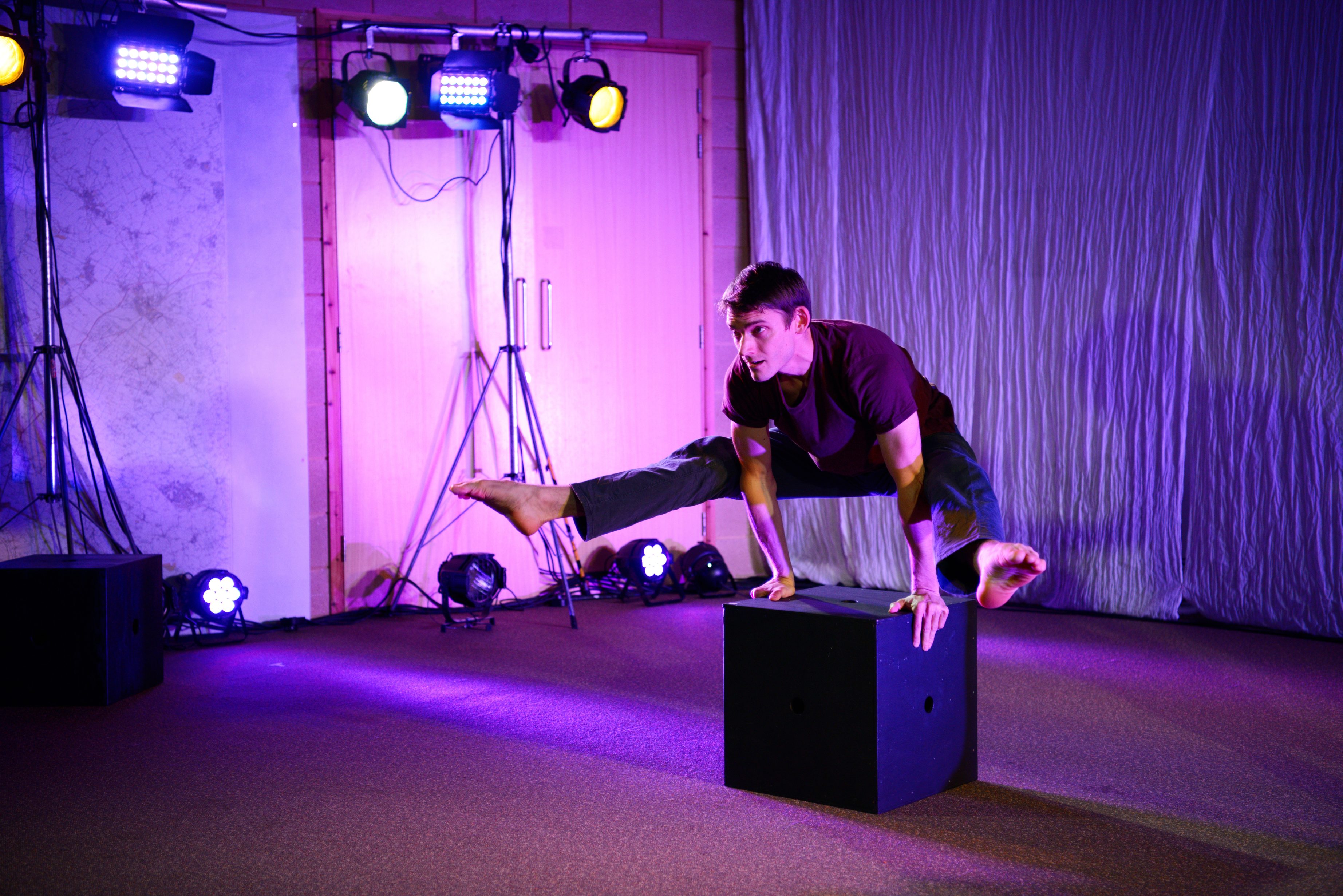 Daniel Cossette is a professionally trained dancer honoring the Lord.  I start with this because there is a good chance you have never heard of ANYONE who can say that.

Daniel is a trained mime, but also performs dance, puppetry, and storytelling.  He has also collaborated with fire spinners and ventriloquist.  He was trained in mime at Mimeistry International as a Marceau-style French mime.

I met Daniel during his years in Houston, where he performed with Ad Deum Dance Company and functioned as their tour director.  As I mentioned in Inspiration Pt 2, He and Randy blew my artistic world wide open when they shared what God is doing through the arts, particularly in dance.

Daniel’s time eventually ended in Houston when he married his wife Melanie and moved to her home country of England.  In Cambridge, England, he continues to honor the Lord through dance and is currently working with Infusion Physical Theater, which he co-founded with Melanie.

I’m excited to share this interview not only because I know Daniel, but because I hope this is the tip of the iceberg of great artists sharing how they are honoring Christ with their art.  Without further ado, please enjoy my interview with Daniel Cossette.

I grew up in a family that attended church regularly. My siblings and I learned about God and Jesus from our parents, and church. I didn’t have any trouble believing in God, but as a teenager I had to make the decision–if I was going to claim to be a Christian–to start following Jesus.

At the time I was engaging in several activities that Jesus clearly indicates are sinful, and I began to pray that he would help me change. He did; and since that time, as I’ve [tried] to walk in obedience, God has led me into greater, and greater things.

He’s opened opportunities for me to travel, telling people about him, and his love, and he’s shown me things which have become my life passions and set me on a career path I might not have found otherwise. Namely my discovery of the art of mime came through joining a missions trip; we were learning mime as an inter-cultural way of sharing the good news of Jesus without relying on words. I decided ultimately to pursue professional training in mime, which has led me to also discover modern and contemporary dance.

Yes, starting with missions trips, creating subsequent mimes and dramas to tell people about Jesus, and God’s ways was the beginning for me. At the mime school where I trained (then called Mimeistry, now Innovo Conversatory) I learned that serving the Lord through one’s artistic calling didn’t need to be only evangelistic of worship based, but could include celebration of the life we share as God’s creation, and dealing with social topics, and the like. But like the prophets of the Old and New Testaments, using parables, actions, gestures, poems, and other means, to communicate godly messages to all who have “ears to hear.”

So I graduated the mime program at Mimeistry and embarked on the life of a self-employed, free-lancer. I worked 11 months of the year as a solo artist, trying to book myself into performances and teaching opportunities. One month of the year, I manage to bring friends together to join me for a 3 week tour where were could put together a show and tour around New England, where I grew up and was currently based. But generally speaking, I was lonely to be among creative people who liked to move, and began seeking out Christians who danced.

In this way I found Project Dance, which is a brilliant organization bringing dancers together from around the world to give their talents to bless people with a free, open-air dance show. There I met some Christian modern dance legends: Steve Rooks, formerly of the Martha Graham Company (NYC), and Randall Flinn, artistic director of the Houston, TX based Ad Deum Dance Company. They introduced me to quality modern dance, a style which has both form and shape, but also flows with such continuous movement that I felt like I was this growing vine, or living tendril which would never stop. When Randall Flinn invited me to learn more from him, I accepted!

I had to pray a lot to learn dance! It was hard to be thrown into dance class with young, professional women who had been dancing since they were 3 years old. Starting at 27… I was a late bloomer! I had a lot to learn, and fast! However, despite feeling God had led me to this point, I was horrified to experience the worst injury of my life in the first year working with Ad Deum: a severe muscle pull that had me hobbling like a 90 year old for weeks. But with time, trial and error, and persistence–from a profound sense that I still hadn’t achieved what God had called me to learn from my time in TX–I persevered through the low points.

I wouldn’t have continued in dance if I didn’t believe God had opened this opportunity for me. I also watched as many people came to Ad Deum saying beautiful things about how God “called” them to come and dance with Ad Deum; and when things got tough, or they didn’t like the part they got, they suddenly felt “God calling them” to something else! I knew God had brought me there–and I knew I had to be faithful to that.

When I did feel my time coming to a close with Ad Deum I also began dating my wife. The transition became clear after that: I was moving to Cambridge, England, where she was based. I don’t know that I would say its different here. Of course there are cultural differences. But you still have people who think Christian art is all low-budget and cheesy; there are still people who won’t come to a Christian event no matter how culturally relevant it is. And there are still people who will come to good art because it’s really good–and like the noble Bereans in Acts they may [want] to hear more about what you have to say.

The arts world is full of people who are very passionate. Without God as their moral compass, they will take those passions as far as they possibly can, inevitably in the wrong direction. If you aren’t prepared, you might get swept along with it. I have chosen to keep my art as purely devoted to God as I can. I don’t want to feature in shows that openly glorify sinful things, or go against the heart of God. I’ve founded my own physical theatre group, and work most of the time with Christians. Only rarely, and with prayerful consideration, do I take “non-Christian” jobs. That isn’t to say that every show I do has a Bible verse in it. But for me, I want the bulk of my portfolio to look like the work of a believer.

My wife, it so happens, is a trained mime as well, and she grew up dancing in the local sports club. I have always wanted to be able to share the stage with my spouse, because it’s such a big part of my life. It’s really fun to dance and mime together, and people often like seeing the playful or loving side of our relationship come out in the dances we produce.

It also teaches us a lot about one another as we work in the rehearsal studio, and have to give and receive constructive criticism, put up without tiredness, and on and on… We’ve taken to praying before we begin, and asking God to give us a spirit of unity and love when we rehearse and perform together.

We are also looking to launch a community dance project bringing a fun, bite-sized dance evening to local community halls; sort of a dance-café. We’d like it to be a place where our students can show off what they’ve been working on, and also showcase bits of projects we’re working on. This way we’re hoping to attract more audience, as well as bring dance closer to people who don’t normally trek down to London for such things.

Do your research. There are lots of amazing professional Christians now, and Christian companies, who prove that statement wrong. If you really can’t find them online, write to me and I’ll name you a dozen.

Mmmmmmm. As my wife and I push into physical theatre I would have to say Bill Wade, Inlet Dance Company, or even Momix or Pilobolous. I find their stuff so innovative, and cool, and I want to go there too. I feel like these guys have the cheat codes to some of the movement levels we’re trying to pass.

Thank Daniel for taking the time to answer my questions.  If you want to learn more about Daniel or contact him, please check out Infusion Physical Theater.